Music is Central to a Posnack Education

Whether students aspire to careers in music or not, all Posnack students have the opportunity to study, play, and sing music. Educating our students musically reinforces the overall curriculum both in general and Judaic studies.

The David Posnack Jewish Day School Music Department fosters our students’ musical potential by providing a positive environment in which they can progress and flourish. The department emphasizes developing the communication skills of our students through band participation, gaining musical self-confidence, public performance, and studying a musical repertoire that includes Jewish/Israeli music, World music, and contemporary genres such as pop, jazz, and blues. Through instruction, practice, and performance students develop skills in music theory, ear training, harmony, and improvisation. Our program has nurtured many rising musical talents. 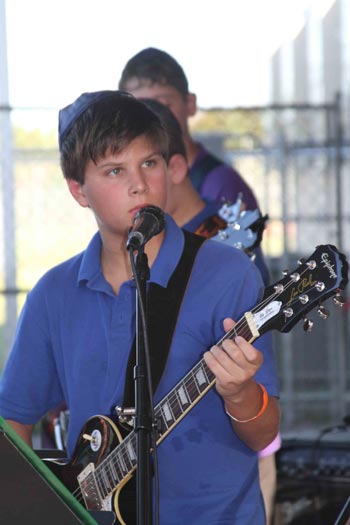 Zohar Shahar is Director of Music and Performing Arts at David Posnack Jewish Day School. Mr. Shahar first came to the school in 2000 as the Lower School music teacher. He moved on to the Upper School and the director’s position a few years later. Since then, Mr. Shahar has firmly established the Posnack music program as a force in South Florida. From school concerts and musical productions to public performances such as the annual Israeli consulate Yom HaZikaron (Israel’s memorial day) ceremony, Mr. Shahar has built a formidable program. His graduates have gone on to higher level academic and professional careers in music. Prior to coming to the United States, Mr. Shahar was the band director for the Sheraton Hotel chain in Israel, an Israeli music ambassador to the U.S., and the owner and director of a school of music in Haifa. He has held numerous teaching positions throughout Israel.

The Heritage of the Congregation of Jacob

Posnack School will soon mark the end of another successful school year. We’ll not only celebrate academic achievement but character and commitment to community too.

END_OF_DOCUMENT_TOKEN_TO_BE_REPLACED

Mazel Tov to the Posnack School Theatre Department on representing our school at the South Florida Cappies Gala. Click to learn about our nominees and commendees.