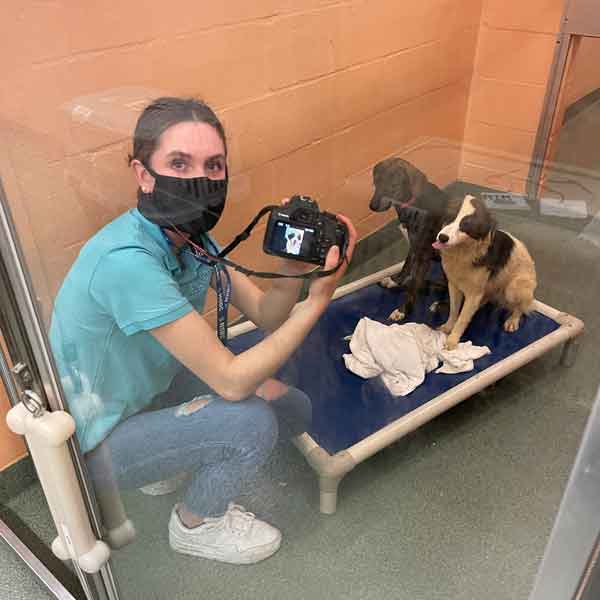 Fischer High School senior Sara W. has been volunteering at the Broward Humane Society on Friday afternoons for almost four years taking photos of animals up for adoption. Humane Society marketing director Cherie Wachter told Sara that her incredible pictures make all the difference to these animals. Now that the shelter is by appointment only people select which animals they want to see based on their photographs.

Most of the time the animals are scared and shy (or excited and rambunctious). Sara spends time cuddling or playing with them and talking sweetly to them to get their attention so they look their best. The majority of the animals that Sara photographs get adopted thanks to her images.

Recently, there were a lot of young dogs that arrived from Louisiana in need of homes. They arrived in crates, filthy, waiting to be processed for adoption. There are many of rules in place to protect the animals as well as visitors. Sara has to clean up between shoots so she can enter a new kennel. She wasn’t phased, ignoring the mess and smell of those poor pups in need of homes.

Thanks to her expertise, Sara was also asked to shoot video of the director for WPLG’s shelter segment on the morning news each week in October.

Kol ha-kavod and yishar koach on this beautiful mitzvah, Sara!