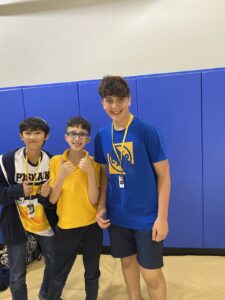 On Tuesday, March 15, Posnack School students wore blue and yellow in support of Ukraine. This effort was organized by the Key Club and Laura Spunt, Key Club Faculty Advisor. The Key Club is an international service organization for high school students which teaches leadership through service to others.

In addition, students in AP US Government and Politics classes created presentations about the current situation in Ukraine and presented their slideshows to all history classes at Posnack School.

Spunt wanted to raise awareness and show support for the people of Ukraine, which led to the idea of wearing blue and yellow. 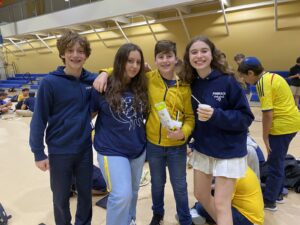 This picture of Posnack School students wearing blue and yellow made it to Dmitriy Nosenko, a Ukrainian citizen. Nosenko was very grateful and appreciative of the support Posnack School is showing, saying “Wow, what great news. It’s very crucial for us to be with the whole world and not alone. Thanks for your support and your prayers!”

Nosenko agreed to share his story to serve as a glimpse of what Ukrainian citizens are currently going through.

Nosenko and his family lived in Kyiv before the invasion. One night, they woke up from the sound of explosions, and they decided to leave their home just a few hours later. They drove all the way to Chernivtsi, in the West of Ukraine by the Romanian border, more than 300 miles away. There was a lot of traffic out of Kyiv, and the line for some of the gas stations was two miles. At these gas stations, there was a five gallon limit on the quantity of gasoline people could buy, which made it more challenging for them to escape farther from Kyiv. Luckily, Nosenko has a car that runs on diesel, using less fuel than other cars. This is the only way he was able to escape so far away from Kyiv.

In Chernivtsi, Nosenko is much safer than in Kyiv and there have been no bombs, but he and his family still have to go to a shelter when sirens go off every day. The shelter in Chernivtsi is an underground parking garage, and hundreds of people stay there. Nosenko recently had to stay the night in the cold parking garage. However, he remarked that people are staying optimistic and no one is crying or screaming. Everything seems normal, and people are acting the same as they did before the invasion.

Luckily, life in Chernivtsi is pretty much normal when the sirens aren’t going off. Essential stores are open and there is enough food and water for everyone. However, this is not the case in Kyiv, where it is much harder to get resources like food and water.

Nosenko works in IT and has still been working remotely throughout the invasion. “We need to do all we can to help our economy stay alive,” added Nosenko. “We need to work and pay our taxes to help the Ukrainian army and people who need additional care and food.”

Ukraine declared martial law on February 24, meaning that the military took control of civilian functions. As a result, the Ukraine State Border Guard Service announced that men ages 18 to 60 were prohibited from leaving Ukraine. This means that Nosenko and many others are staying in Ukraine, waiting to see if they are needed by the military to fight against the Russian army.

Nosenko is very happy about all that people around the world are doing to help Ukraine. “It’s very important for us to see that a lot of people across the whole world support us and try to help us,” Nosenko said. “It’s important for us that we are not alone in this situation and that people understand that this is not our war, we didn’t start it. We don’t want this war. We are defending our land. We are not aggressive.”

Nosenko loved the pictures of Posnack School students in blue and yellow. “This is a very good initiative because people across the world can demonstrate in different ways that they are standing with us.”

There are many other ways students can help Ukraine. “One way students can help is by donating money to different organizations that are collecting for Ukraine,” Spunt said. “One example is the Broward Jewish Federation.”

Nosenko gave additional suggestions for how students can help. “First of all, to not forget that the war is still going on in Ukraine,” Nosenko remarked. “Second, ask your government to help Ukraine with defense weapons, to close the sky, basically any help the government can provide, to introduce new sanctions. That’s very important for us at this moment. Because to be honest, the whole world should understand that it’s not just a conflict somewhere in Europe. It’s basically a war against all civilization, which was started by Russia. So every country in the world should help end this war as soon as possible.”